Andy started attending West Midlands folk clubs before he was officially old enough to go into a pub. His first instruments were a tin whistle and mandolin followed by a concertina, which became his main interest. In recent years he has acquired and plays many early string and woodwind instruments.

Over the years he has played in several different bands and for 30 years has been in the dance band Captain Swing, who have played for festivals and dances all over England.

Andy also sings and plays in two duos, The Night Watch with Ian Pittaway who perform Medieval and Renaissance music on authentic woodwind and strings.

For more information on The Night Watch please see their website www.the-night-watch.org.uk

Daring Young Men is collaboration with story teller and singer Chris Lowe; together they perform songs from the Victorian and Edwardian Music Hall. 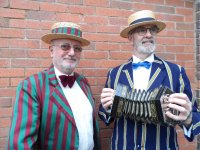 Andy has recorded two solo albums, A Curious Age and A Mass of Money Linen, Silk and Starch. Also, two Captain Swing CD’s as well as one with The Night Watch. He has also been recorded with Chris Lowe by Birmingham Museum & Art Gallery for their permanent Birmingham Through the Ages exhibit.

He was one of the musicians playing period music for the historical TV Drama, The White Princess which was shown on British television in 2017.

He works regularly as a living history leader for Sandwell Museum Service delivering workshop sessions covering the Tudor, Victorian, World War 2 periods as well as a literacy project based around ghost stories. He works regularly in historic venues playing period music for many different types of events.

Andy is in possession of an enhanced DBS. Enabling work with children and vulnerable adults as well as Public Liability Insurance through the Musicians Union.